Jubilee School of Ministry’s maiden class first gathered in September of 1998. This first class assembled every morning from 8:30AM – 11:30AM and sat under the teachings of a volunteer teaching staff composed mostly of local ministers. That defining moment launched a movement that would impact the world. Within a few years J.S.M. became one of the few ‘schools of ministry’ to gain I.N.S. status and with it the ability to issue student visas to international students. This move created a great influx of international students from around the globe. To date J.S.M has graduated students from Indonesia, Nigeria, Poland, Germany, Pakistan, Kenya, Puerto Rico, Zambia and Mexico. Interest from overseas continued to pour in with each year seeing around 75 applications from abroad! The interest overseas led to the establishment of schools in foreign nations. This idea exploded to the point of having to put a cap on the number because the hunger was growing faster than J.S.M.’s ability to effectively oversee the schools. Currently there are 40 schools operating in 8 nations. These schools produce literally thousands of graduates every year and there is no way to account for the lives that these thousands are impacting around the globe. 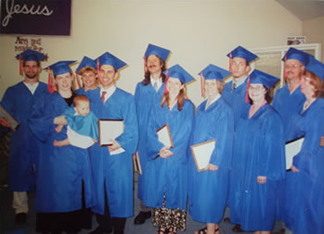 With time came experience and with experience came change. In 2004 the daily class time was moved from the 3 hour block in the morning to a 3 hour block in the evening. This new 6:30PM – 9:30PM timeslot proved to be a good move. It allowed for less interference with existing work schedules and made it easier for students needing jobs to find them. The year 2004 also saw the addition of a “Second Year” program. This curriculum consisted of advanced leadership training designed for those First Year students that felt a call specifically into a leadership role, or for those wanting even more impartation. Second Year students were provided with a challenge, sometimes to an entire class and sometimes individually. These have been mission trips, marketplace related or just challenged to step out in a more direct leadership role or spiritual gift. The Second Year class always ministered to First Year a handful of times each year. On these nights the direction of the evening’s ministry is completely up to the class. The Second and First Year classes were also found collaborating on things like street ministry or serving during conferences and weekly services. Starting in 2006, the classes were organized into a “track” schedule. This allowed the already flexible evening scheduling to accommodate even more students with the ability complete the First Year program over a few years. With the track scheduling in place students could finish the First Year program over the course of a few years.  In 2007-08 the early version of the MP3 school was introduced. This involved pre-recorded classes being placed on an MP3 player. Students could buy classes by the track or the entire school which gave them an MP3 player with the classes preloaded. This radical idea introduced a new way to get information to the masses in a flexible and affordable way.

Starting in 2010 JSM introduced the ability to stream the entire catalog of audio recordings from the classes. The parent ministry of Jubilee School of Ministry felt called to relocate the ministry from Fairfield, IA to Des Moines, IA.  This move took place in 2009 leading to an end to the traditional classroom / dorm room campus ministry school that once was. However it birthed the idea to let the curriculum continue to live and grow and develop students online.

JSM continues to evaluate, refine, explore and push the boundaries of offering quality Kingdom based teaching.  Over the years there have been many God given ideas and tweaks to improve the school model we currently operate. One thing that hasn’t changed is the volunteer teaching staff. This group of dedicated people gives their time willingly to invest into the future leaders of the church. The staff ranges from Doctorate level teachers to past graduates a few years out of the school. Most of the school’s curriculum has been developed by school president Apostle Greg Crawford and has been approved through our governing accrediters and ministry covering.

For a detail history of the parent ministry of JSM, Jubilee International Ministries CLICK HERE